If the p-value is very small (<0.05 is considered generally), then our sample is “strange,” and this means that our assumption that the null hypothesis is correct is most likely to be false. Thus, we reject it. Let us understand what is p-value through few examples:

The p-value is the probability that the event occurs, assuming that H0 is true; that is, the coin is fair (if we were in the universe where H1 is true, then the p-value would be 1 for all the events). The occurrence of a tail once is quite regular, and for a fair coin, the probability of occurrence of Event 1 is 0.5. However, each time we toss the coin, the outcome is a tail! It is something doubtful to happen. Thus, the p-value decreases down the table. The probability that the tail occurs six times in a row is 0.01, which quite low. There is only a 1% chance that the event occurs in the universe where H0 is true (we must be super lucky for such a thing to happen).

Therefore, we reject the claim that the hypothesis is true as the p-value goes below 0.05 (after the 4th event). 0.05 is generally considered as the Statistical Significance.

If the weights of peanuts in all the packs are in the range (65,75) that is close to 70g, and the mean is around 68.5g, it is difficult to decide if our claim that H0 is true is correct. In such cases, we find the p-value for this data compared with the mean of 70g.  Suppose that the p-value we got is 0.18. Hence, there is an 18% chance of getting a mean as low as this (68.5g) if there is nothing wrong with the cookies (H0 is true) that is mean weight of peanuts in the cookies >= 70g (Mary is relieved!).

If the p-value we obtained were less than the significance level of 0.05, we would reject the null hypothesis. 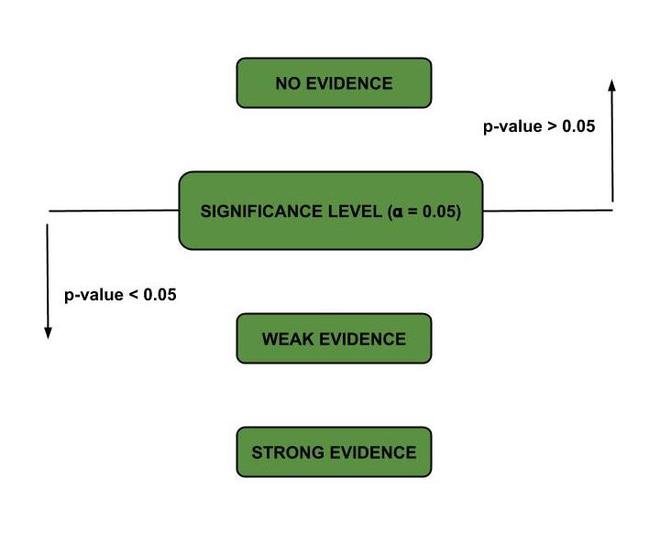 Therefore, the p-value is not –