The word Inheritance is quite familiar with everyone. In common terms, the word means the bequeathing of property and characteristics from generation to generation. For example, the property or characteristics of parents are handed down to their children and the forthcoming generations.

Object Oriented Programming (commonly OOP) concepts are based on real life examples, where every entity in existence can be represented as an object. Thus, being one of the fundamental concepts in OOP, Inheritance is based on the example we discussed earlier – bequeathing of properties and characteristics from parents to their children.
Inheritance in Java, as derived from the concept of OOP, is defined as the process by which a child class or object (known as subclass) inherits the behaviors and properties(methods and variables) from its predecessors or parent class(known as super class). Let us delve a little deeper into the concepts of Inheritance in java with the following sections.

Inheritance in Java is implemented by the use of the keyword extends. This special word makes the Java compiler understand that the current class is inheriting or extending another class. Let us look at the following snippet example to understand the basic syntax.

Example of Inheritance in Java

The above code snippet on execution, provides the following result:

From the above sample we see that the child class B is able to access the variable a of class Parent and use it in its own class. Thus we see that using inheritance, sub-classes may utilize variables and methods from their super-classes.

Types of Inheritance in Java

There are various forms of representing a Parent-Child relationship in Object Oriented Programming. Java supports three types of Inheritance on the basis of classes. The various types of inheritance shall be discussed further in this section and how they are realized using Java.

This is the simplest form of inheritance in Java and is a simple ONE to ONE relationship between two classes. A basic example of single inheritance has already been discussed in the section above, where a single Child class had inherited the attributes of its Parent class. 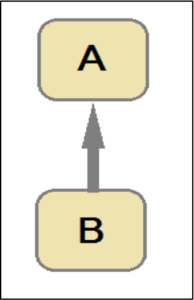 The picture given alongside represents a single inheritance between classes A(super-class) and B(sub-class)
Let us see a small code snippet as an example of Single Inheritance.
Code:

Hierarchical Inheritance is a type of inheritance where many sub-classes extend a single super-class. 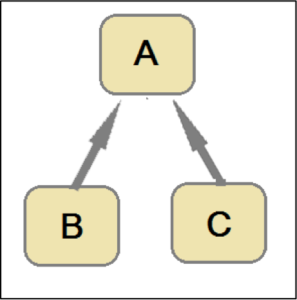 The picture given alongside represents a basic form of Hierarchical Inheritance. This form of inheritance is basically multiple single inheritances where all sub classes inherit from a single super class. Here, classes B and C are sub-classes of class A and inherit its attributes and behavior.

Let us see a code snippet as an example of Hierarchical Inheritance.
Code: 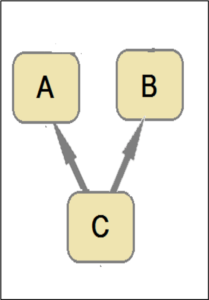 Why does Java not support Multiple Inheritance?

To reduce complexity and ambiguity, Java does not allow Multiple Inheritance using classes. Let us explain the ambiguity with an example.
Say, there is a class A having a method display() and class B having another method display(). A third class C, extends both A and B and as per the concept of inheritance, is able to access both the display() methods of A and B. Now, when creating an object of C and calling the display() method, the compiler will not be able to discern which display method to call as both classes A and B have a method having the same name and are extended by class C.